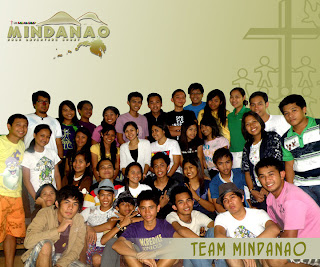 I don’t wanna go go.. I don’t wanna it, no no.. I don’t want to walk this earth if I gotta do it SOLO! (haha) SOLO by Iyaz, this was the song that made everybody last song syndrome (LSS) even until now since we had our first ever Mindanao ROCK adventure SHOUT! Indeed! It was a great experienced for all of us (ROCK leaders of Mindanao). It was a history of KFC ministry specifically in the ROCK program. KFC Mindanao ROCK! Yeah!!!!!!

It was an adventure that we will really be reminiscing as we continue to serve in the KFC. Last May 24-29, 2010, just after the Mindanao Island kid’s village in Koronadal, South Cotabato. Everybody was so excited for the ROCK adventure SHOUT of all the Provincial Kuyas and Ates and mission volunteers of Mindanao. The venue for our SHOUT was almost an hour away from the city proper (Koronadal City). We were not yet on the venue but our adventure already begun. From the venue to the terminal where we ride a bus to Lake Sebu was already an adventure for us. Because we were about 30 plus then, we need to ride a bus that would really accommodate all of us. Since only one was familiar with the venue that we will be going. (It was really fun! Picture here Picture there and Picture everywhere). After an hour travel we finally reached our venue. Everybody was amazed of how scenic and relaxing Mountain Log was (Name of the resort in Lake Sebu). From the moment we arrived and all of us were hungry, we were welcome with our lunch (fried TILAPIA). Is this a vacation or what?! (That was everybody’s comment) We forgot the tiring travel that we had when we reached the place and of course after we had our lunch. (haha the best!) Not only that! (Lahat ng klase ng luto natikman naming!)

This would really be a great week for all of us! (Everybody’s expectation) Indeed! It was a memorable SHOUT for all of us. Not only because the place was so nice but the things that we learned during the activity. (Workshops, sessions, and talks) Personally, I was able to learn how to deal with different people from different provinces and with different backgrounds. But the Lord was so good because He was able to make us united and even treated one another as brothers and sisters in the community. I can say that strong relationship was really established because even at this time we continue to communicate with each other and even recall the good things that happened during the SHOUT. (Picture taking in the Lake, Amazing Race, the highest zip line) That was really a superb experienced! We cannot wait for the next SHOUT.

With all these things that happened in the SHOUT, We did not forget the reason why we were all there. It was a spirit filled week for all of us because everybody was really serious with our prayer time (we wake up 5 in the morning) and to think it was really cold there. Brothers were able to lead us powerfully through the worship. The Lord was just really in our midst at that time and we can feel His presence. I thought that everybody will feel tired during that SHOUT because we came from the MKV but the Lord was just really amazing because He gave us the strength to complete the week with joy in our hearts.

That was only the beginning of a great friendship among the ROCK leaders of Mindanao and a start of a relationship that would really last for a lifetime. We will continue to inspire each other as we serve KFC ministry not only in Mindanao but to all the ROCK leaders in KFC. We don’t want to walk this earth if we gotta do it SOLO! Mindanao ROCKS! From adventure to changing the world! Exciting!