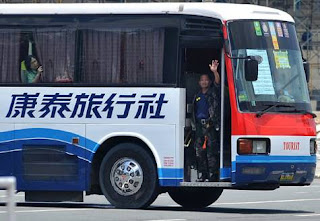 a sad event happened..
this will really be part and known for Philippine History..

A police captain, who has been dismissed in his job and position, hostage a tourist bus in Quirino Grandstand..
it took for almost 12 hours..
from 8am - 8pm (i guess)

there were changing of firing..
on the side of Cap. Mendoza (the suspect), i think he was just pushed to because of what happened to him and what the police done to his family members.

because of what happened,
many things came into my mind..

1). know how to SECURE YOURSELF. do not enter a situation, in which you know you'll be in danger.
2). widen your UNDERSTANDing abilities.
3) think and hold your RESPONSIBILITIES.
4) THINK first before you act
5) DONT BLAME anyone without having proofs.
6) learn how to RESPECT someone's right
7) CONTROL yourself. control your temper.
8) PATIENCE. for a good COMMUNICATION.
9) LET GOD BE THE CENTER OF YOUR LIFE.

:(
im really sad this day..
i mourn for the victims and for the Philippines.

let's pray for their souls and their family
and for the Philippines..